Over a quarter of smokers refuse to try vaping as they believe it’s just as bad – or sometimes worse – than smoking cigarettes. This is a myth that needs to be dispelled quickly.

A survey commissioned by Yorkshire Cancer Research asked 844 smokers and 1,156 ex-smokers what they thought about smoking and found that a lot were suspicious of e-cigs and vaping with a large portion saying they had no intention of ever trying vaping.

The survey showed that most typical smokers had smoked for around 22 years of their life and have attempted to quit around 4 or 5 times throughout that time.

Those who were unsuccessful in their attempts to kick the habit cited issues such as stress, peer pressure to continue smoking and lack of an adequate support system to help them along with their goal.

But as a positive note, the survey also found one in ten of the ex-smokers had managed to kick the habit by means of vaping – and were also saving around £337.80 a year!

The NHS suggests that if people use their Stop Smoking Service then they are more likely to give up the cigarettes for good. Despite this advice, 44 per cent still believed that going cold turkey was the best method of quitting. 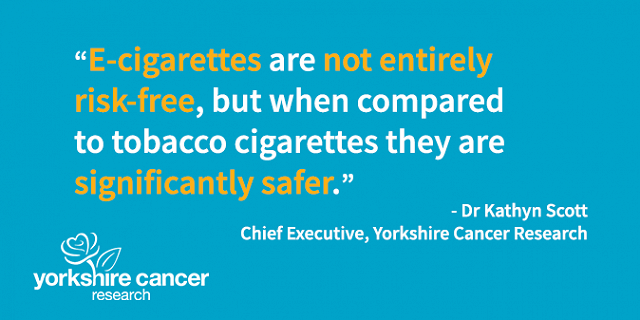 The biggest reasons participants gave for wanting to quit wasn’t because of health reasons – but more attributed their desire to give up to save money. 43 per cent cited money issues as a first cause, with 30 per cent citing health issues as a primary reason for quitting.

Other reasons and motivations for kicking the habit included pressure from friends or family, pregnancy and becoming and a parent – and even becoming a grand parent. A further 16 per cent said it was because they had recently experienced the death of a friend or family member due to smoking.

‘But everyone is different, so the best way to help you give up is to get support from a local stop smoking service.

The findings from Yorkshire Cancer Research follow a recent study from Birmingham University that claimed vaping could cause lung disease.

The researchers from the university found that the flavoured liquids used in e-cigs may impede the immune systems ability to clear the lungs and prevent harmful chemical buildups.

However, the authors did stress that e-cigarettes still have a lower risk of lung cancer than conventional tobacco products.

Public Health England ran a campaign during 2018 that claimed e-cigs and vaping is 95% safer than smoking tobacco. The survey from Yorkshire Cancer Research revealed that just under half of smokers were aware of this fact.

The survey also claimed that 44 per cent of smokers incorrectly think that vaping is just as bad or as damaging as smoking tobacco – and do not know that is poses a much lower risk to health.

Dr Shahab, a leading smoking cessation academic and associate professor in health psychology at University College London, previously said: “The false belief that vaping is as harmful as smoking could be preventing thousands of smokers from switching to e-cigarettes to help them quit.

”Research we and others have conducted shows that vaping is much less harmful than smoking and that using e-cigarettes on a long-term basis is relatively safe, similar to using licensed nicotine products, like nicotine patches or gum.

“Using e-cigarettes or nicotine replacement such as patches or gum will boost your chances of quitting successfully.”

If you know a smoker whose looking to quit and still believes vaping is just as harmful – show them this article. You could be saving their life!

E-cigarettes will put out smoking for good There are billions of people that smoke in the world and most of... read more

Don't Let Gunk Ruin Your Vaping Experience If you have been using standard or sub-ohm vape for a while or... read more

New Research Gives Another Win To E-cigarettes The new research showed what would happen if the number of people in... read more

All the information on E-CIG battery life How Long Does the Battery Life of a Vaporizer Last, On Average? First of... read more

The UK Will Continue To Support Flavoured Liquid Other governments have begun to attack the UK for allowing people to... read more